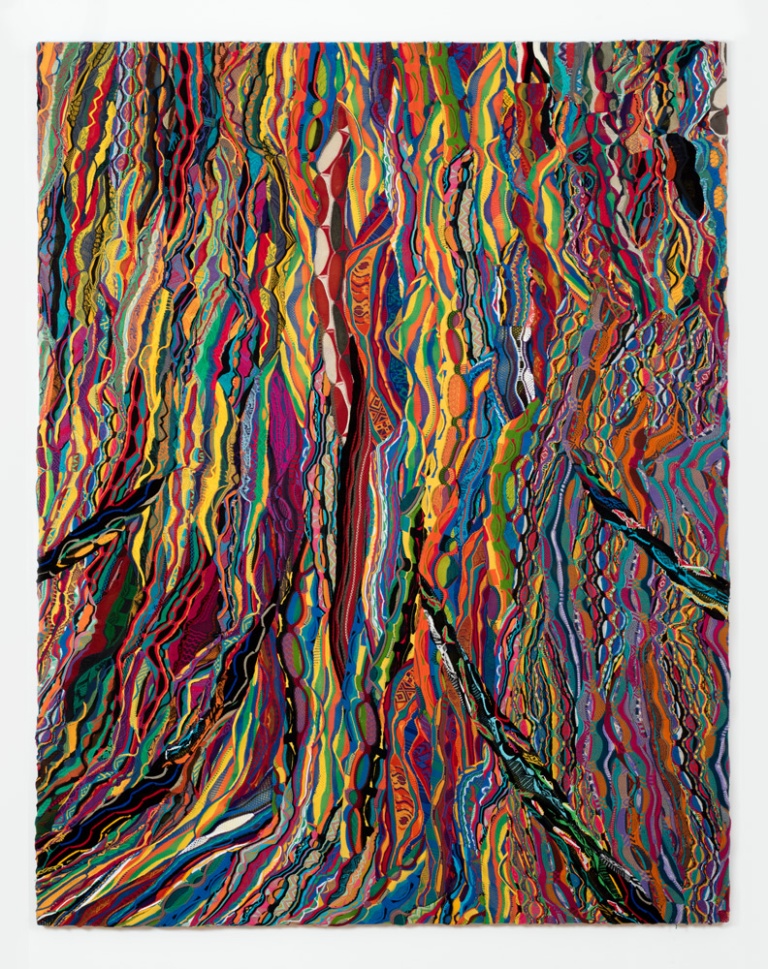 If Bruce Nauman “owns” water, as Hennessy Youngman opines in one episode of his YouTube series, “Art Thoughtz,” then Youngman’s creator, Jayson Musson, “owns” Coogi-brand sweaters, a hitherto unexploited art material. In his exhibition at Fleisher/Ollman, and in recent shows in New York, Musson has staked his claim on these eye-catching Australian pullovers of yesteryear, which he deconstructs and reassembles into luscious, paintless paintings.

Vintage Coogis constitute a raw material of uncommon allure. Originally advertised as “wearable art,” they entered the world of fashion in the ’80s, an era of Australiana, when designers celebrated the intense colors and textures of Australia’s environment. Coogis became associated with African-American success through Dr. Heathcliff Huxtable on “The Cosby Show”—one he wore is currently on exhibit at the Museum of the Moving Image in New York. Rappers sported these embodiments of the good life in the early ’90s, further freighting the sweater’s significance as a status symbol in the black community.

In their ability to communicate a cultural narrative, Musson’s Coogis are related to the faux-batik Dutch textiles favored by Yinka Shonibare, which encode the history of colonialism in Africa. But it was their visual complexity and not their conceptual richness that drew Musson to Coogis in the first place. The knits possess an extravagant tactility that in Musson’s view mimics the figure/ground relationships of traditional painting. Too, the patterns remind him of Jackson Pollock, as he has said in interviews.

After separating Coogi sweaters into pieces, Musson arranges his components into compositions that he stitches together by machine and stretches tautly. This piecing technique resembles Lucas Samaras’s vibrant “Reconstructions” of the ’70s, made of cloth patterned with Op and Ab-Ex-like designs. Musson’s new work nods appreciatively at feminist precursors such as Miriam Schapiro, who “collaborated” with those who crafted the fabrics she recontextualized in her art.

Lambent shapes are Musson’s basic compositional unit. They writhe horizontally in Fainted When the Book Mentioned Me (all works mentioned 2012), made from archetypal Coogis that are heavy on primary colors. Vija Celmins’s bird’s-eye-view renderings of choppy seas have a similar kinetic energy. Some of Musson’s modules contain readymade bubble chains that underscore the implication of water. In How Do You Get From Here to the Rest of the World?, the bulbous slivers of knit lick upward, like the fires of Hell in medieval frescoes.

Bather IV (Cheryl Donegan Knows What I’m Talking About) is an abstract winterscape of undulant tans, browns and blues that takes advantage of atmospheric perspective to suggest spatial depth—darker forms appear closer and lighter ones seem farther away. Here the basic segments read as blades of vegetation; like Henri Rousseau’s grasses, they are difficult to judge in terms of scale. In sections of Sherrie, the sole diptych in the show, black and blue lattices leg up a yellow surface plane; elsewhere, squiggles of yellow knit pun on the shape of paint extruded from a tube. South of the Border, West of the Sun, which takes its title from a Haruki Murakami novel, is the only work restricted to one color, a red that grows less neutralized and more intense as it modulates from the top and bottom towards an incandescent center. As he did in his earlier performance persona, Musson reveals himself in this new body of work to be a canny weaver of popular culture and high art.

Photo: Jayson Musson: How Do You Get From Here to the Rest of the World?, 2012, mercerized cotton stretched over cotton, 70 by 96 inches; at Fleisher/Ollman