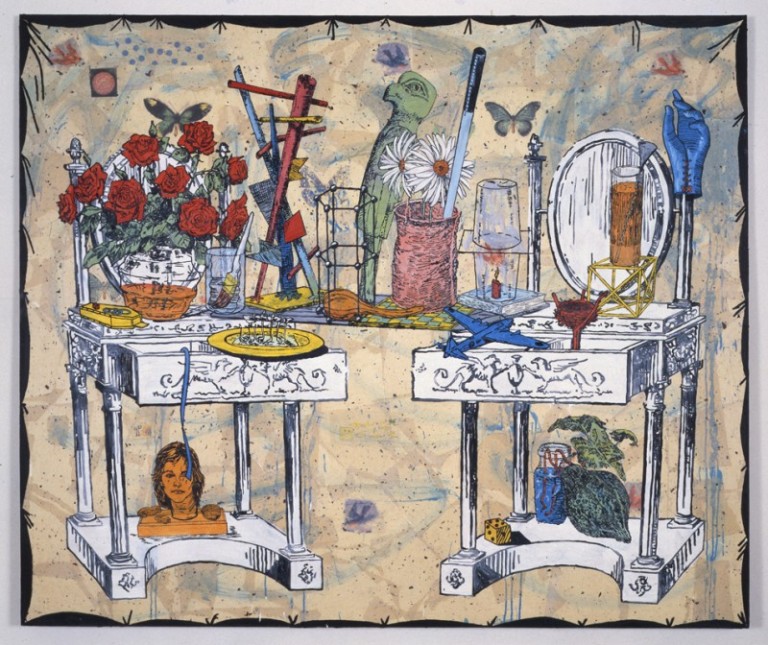 When Jane Hammond began her most recent body of work, she invited poet JohnAshbery to suggest a series of titles—names that became the inspiration for her paintings.

In June 1993, Jane Hammond phoned John Ashbery and asked if he would draft titles for a series of her paintings—in advance of their creation. A week later, he faxed her a list of 44 candidates. For an artist to begin the creative process with a title will seem to many to put the cart before the horse. But to Hammond, Ashbery’s image-laden names became the vehicle that pulled her paintings into being. The first results of their collabo­ration were on view in two recent exhibitions. New York’s Jose Freire Fine Art, Inc. exhibited seven of these canvases, and two others from the series were included in the solo show of Hammond’s work organized by Sue Scott for the Orlando Museum of Art.

Hammond is a painter who enjoys delegating decisions that others prefer to keep under their own control. In 1988 she decided to create paintings derived solely from a private inventory of 276 images culled from different historical periods, high and low cultures, and the realms of science and art. She voluntarily imposed limitations on her freedom of choice, circumscribing the universe of visual possibilities. But within months, she began to dream in this vocabulary and to get ideas for new compositions entirely in the terms of her readymade repertoire.

Poetic juxtapositions abound in her canvases. The images derive from exotic and fanciful sources such as magic, puppetry, knot-tying diagrams, alchemy, erotica, palm­istry and phrenology, and include commonplace items such as flowers, dancers, games, children’s drawings, furniture, animals and the alphabet. When she assembled her image stock, Hammond was not aware of a 1970 poem in which Ashbery, referring to ut pictura poesis, a classical esthetic doctrine declaring “as is painting, so is poet­ry,” seemed to have foretold her method. In “And Ut Pictura Poesis is her name,” Ashbery had counseled an unnamed artist:”… Now,/About what to put in your poem-painting:/ Flowers are always nice, particularly delphinium./ Names of boys you once knew and their sleds,/ skyrockets are good—do they still exist?/ There are a lot of other things of the same quality/ As those I’ve mentioned. Now one must/ Find a few important words, and a lot of low-keyed, /Dull-sounding ones.”1 Quite coincidentally, Hammond had incorporated many of Ashbery’s prescriptions.

Language has always been important to Hammond, who was the edi­tor of her high school literary magazine and studied poetry in college. When she was devising her system in the late ’80s, she read villanelles, a verse form with regularly recurring lines. Each appearance has a fresh context which may offer new meanings. Similarly, in Hammond’s recombinative pictorial matrix, an image is affected by its setting. She thinks of her stock as being like a deck of Tarot cards, which tells a different tale each time it’s dealt.

The turn-of-the-century French novelist Raymond Roussel is one of Hammond’s favorite authors, and his translator, Trevor Winkfield, is a friend of hers and of Ashbery’s as well. When Ashbery delivered a 1989 Norton lecture on Roussel at Harvard, she flew from New York to Boston to hear him. In late 1990, in a short catalogue essay on Hammond’s work commissioned by Sweden’s Wetterling Gallery, Ashbery likened her resourcefulness to that of the castaway theatrical troupe in Roussel’s Impressions of Africa.

The alphabet is a constituent of Hammond’s visual world. She has pre­viously used language as an aid for devising compositions. For example, in an untitled work from 1990, she made the found phrase “a prudent man shuns hyenas” her starting point. She teased anagrams out of it, then derived images from those words. But titles did not play a part in her invention: all her paintings executed before 1993 were untitled. For clari­ty’s sake, they were often identified by combinations of numbers that correspond to the counting system she devised for her image stockpile.The full roster of potential titles that Ashbery drafted for Hammond was printed in the catalogue that accompanied her show at Jose Freire.2 As of December 1994 she had engaged 13 of them, reusing one four times and another twice. Ashbery’s appellations resound with his surrealist wit and reflect his ear for colloquial speech. The provocative “Do Husbands Matter?” resembles a headline spied from a supermar­ket checkout lne. “Heavenly Days,” “Kibosh,” “Freezer Burn” and “The Peace Plan” are Ashbery’s readymades, given a fresh start by the absence of context. By making slight alterations, he nudged clichés into novelty, as in “The Stocking Market,” “Bread and Butter Machine” and “Forests of Fire.” Some titles adopt the snappy boasts of advertise­ments, for example, “Prevents Furring” and “You Saw It First Here.” This latter, like “Dumb Show” and “The Mush Stage,” evokes aspects of sight and spectacle, salient issues for contemporary painting in gener­al and Hammond’s work in particular.

Hammond read Ashbery’s list and set it aside, trusting that pictori­al ideas would begin to associate themselves with each phrase. She likened the process of formulating these compositions to a student science project she once did, in which crystals slowly took shape along a string suspended in a clear solution.

All Hammond’s previous paintings employed square or rectangular supports, but the works that grew from the Ashbery titles often took other forms. Sore Models, for example, the first title she worked with, became a pair of foot-shaped canvases. She returned to this title three times, employing a shaped diptych format for hands as well as feet. She next created The Hagiography of This Moment. According to Hammond, as she thought about this title, a frontal, bilaterally sym­metrical composition sprang “full grown” from her head. Again, the result is a shaped canvas, this time a shield that slopes to a center point at the bottom and is topped by three gables, each with a painted oculus. The form alludes to both a church and an altarpiece.

Like many of her paintings, The Hagiography of This Moment is full of jocular allusions. Dominating the canvas is a central praying figure with red wings who bears Hammond’s own visage. She stands upon a cloud which is in fact the smoke from a fire directly below. The figure, upon a mottled metallic field of gold leaf over a nubby ground, is flanked by two incongruous cheery morning-glory vines and a text in an ecclesi­astical typeface in which the artist makes a deadpan confession of how she once netted the neighbor’s goldfish and fried them in butter.

Beginning with Pumpkin Soup #1, Hammond prepared the canvas for all works in the series by lami­nating onto it layers of paper. She came to regard a layered paper field as conceptually and physical­ly appropriate for realizing the poet’s titles. In the last few years, Hammond has experimented with paper processes in an ongoing series of collages which involve solvent transfers, lino block prints and rubber-stamped images.

These techniques are used to strong effect in Sea of Troubles, a title Ashbery lifted from Hamlet’s “to be or not to be” soliloquy. A framing device of twinned pages, like an open book, does not fully contain the theatrical assembly of images, some of which violate the internal boundaries. Spatial complexity is compounded by actual and implied layering of elements. For example, slightly overlapping a vignette of a pair of hands hanging a curtain is a trompe 1’oeil rend of the canvas. In keeping with the Shakespearean source of the title, Hammond evokes ghostly appearances by submerg­ing images in the underlayer of paper. These include vintage illustrations of a girl’s life-saving lessons. That and an overpainted aquarium make water references that allude to the title and have auto­biographical significance for the artist. A skeleton, standing in the aquarium, is prominent on the left-hand “page.” The skeleton con­fronts the grim alternative inherent in “to be or not to be.”

One of the last paintings of this group to be completed before the New York show opened was Pumpkin Soup #2. Like nearly all of the work in the series, it has a frontal, symmetrical organization. In her first work with this title, included in the Orlando exhibition, Hammond used the image of a tacked curtain as a framing device to comment on issues of illusionistic representation. In this second interpretation, the reference to illusion is made by layering images. Also, where a wooden parrot is centrally placed in the first rendering, a trained monkey—an age-old symbol of art’s ability to ape nature—appears in the second. This lamp-toting simian is flanked by twin vanity tables replete with photo-transfer portraits of Hammond and Ashbery that take the place of the mirrors. A vanitas still life of flowers and pumpkinlike vegeta­bles inhabits the central space. On her side, Hammond depicts a small, geometricized human figure and an open hexagonal framework that suggests an engineering or scientific model, alluding to her earlier scientific interests. To Ashbery she assigns the attributes of a small sculpture of a centaur atop a glass box and an assemblage of nonobjective forms, to parallel his enthusiasm for both classical and abstract expression.

The Hammond/Ashbery collaboration follows a long line of precedents of New York School poets and painters working in concert. As James Schuyler described the heady milieu in 1960, writers were deeply affected by “the floods of paint in whose crashing surf we all scramble.”3 Grace Hartigan’s 1952 “Oranges” paintings and The Hero Leaves His Ship of 1960 were based on poems by her friends Frank O’Hara and Barbara Guest, re­spectively. For Alfred Leslie’s 1964 film The Last Clean Shirt, O’Hara wrote the subtitled dialogue with­out having seen the footage. Larry Rivers teamed up with O’Hara, and subsequently Kenneth Koch, in joint text/image projects on paper and canvas. These collaborations were like the old tap dance routine “you take it,” in which each participant has a turn at express­ing himself or herself in response to the preceding contribution. The Hammond/Ashbery project is like another round of “you take it.”

Ashbery has, over the past 30 years, worked with painters Jane Freilicher, Alex Katz, Joe Brainard and Joan Mitchell on publications that paired preexisting images and text, but his venture with Hammond gave him a different opportunity. He wrote with a specific body of work in mind, and yet was able to observe the effect of his writing on the cre­ation of new paintings. His words became the catalyst for and not the summation of the painter’s creative act.

Author: Judith E. Stein is a free-lance curator and critic based in Philadelphia.